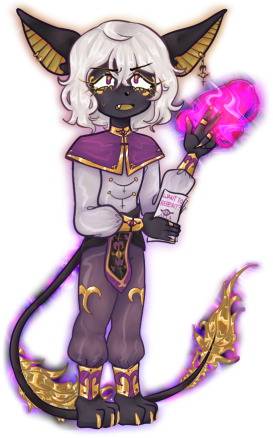 KNOWN AS "VIDUUS" TO FOLLOWERS

Crow is a self-proclaimed messiah whose cult has begun growing considerable traction in their small pagan town. He considers himself a rival to Ren, who he believes to have been falsely marked as a God.

He thinks of himself as morally superior to all those around him, often passing judgement verbally when he disapproves of something. He looks down on others & acts pompous & entitled due to his deity delusions. He's descended from a near-extinct line of Jackals who possess unique psychic & magical abilities, as well as a connection with spirits.

He's charismatic, passionate, arrogant, empathetic, argumentative, opinionated, & a bit lonely. While he surrounds himself with followers & envies Ren for the attention he receives, he wants to be his friend. He clings to Ren like a puppy, but is too loyal to his own beliefs to be a lap dog.

His cult's primary focus is on Eschatology; on "Global Enlightenment", as he calls it, via the apocalypse. His main priority is furthering the spread of his religion, so he's seen around town holding frequent seminars & cult gatherings to discuss his visions & to help "cleanse" his followers of their recent sins. Ignorant civillians find themselves drawn in by the promise of "True Enlightenment" when the time comes, by Crow's vague (but often true) predictions, & by his connection to the deceased.

COMPLICATED. HE'S JEALOUS, BUT HE ADMIRES REN & FEELS THEY'D HAVE A GOOD CONNECTION IF HE COULD GET PAST HIS EGO.